In a comment on an earlier post, my brother remarked on my long history of experimenting with archaeological and historical reconstructions.

Well as Gordon would admit, the experimentation hasn’t always been a total success. Dad accused him of trying to poison him when he tried to recreate the food stuff of the ancient Britons and offered it to Dad.

Well, after that I have made it a principle to always try things out myself, rather than testing them on volunteers, however willing. I have ridden reconstructions of early bicycles, a Hobby Horse and a Penny Farthing, sailed in various historic craft, and cooked and eaten Roman, Medieval and Tudor food. But this latest reconstruction is one I have absolutely no intention of trying. 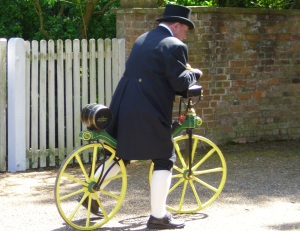 Carrying out research for Picking Darcy’s Pocket I have made use of a remarkable online resource, the records of the Old Bailey. Looking up cases of pickpocketing, to discover what was actually stolen in the early nineteenth century, I soon discovered that the group most likely to be accused of ‘Theft from the person’, were prostitutes. They were also most likely to be found not guilty, juries tended to believe that men tried to pay them with objects like watches, then accuse them of theft to get their property back. So the object I decided to reconstruct was an early condom.

Condoms have been around since the sixteenth century at least, they were initially intended as protection from sexually transmitted disease rather than as contraception. The earliest were made of fabric, soaked in vinegar before use, then animal gut was used and became the standard material until vulcanised rubber became available in the mid nineteenth century. Gut was far from perfect, it needed careful treatment if it was to remain usable. Famously James Boswell, the biographer of Dr Johnson, recorded soaking his ‘armour’, in a pond in St James’s Park before he could ‘enjoy’ a prostitute. I wonder if there are bylaws against soaking condoms in ponds in Royal Parks?

I had no access to animal gut, so decided to make one out of fabric, based on original specimens preserved in the Wellcome Collection. The condom is eight inches long, two inches across, and was held in place by a ribbon at the open end. Apparently they were made in different sizes, Casanova described trying on different condoms until he found an English Overcoat that fitted perfectly. 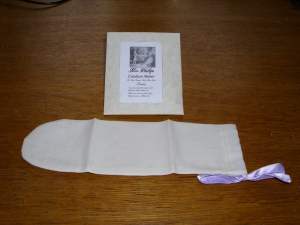 Now I very much doubt that Mr Darcy would have had one of these in his pocket, but what about Jane Austen’s sexually immoral characters, John Willoughby, George Wickham, Henry Crawford, and William Elliott. The first two almost certainly would have had used them I, however, will not try.

5 responses to “Picking Darcy’s Pocket – A Matter of Protection”