What’s in a Name?

I just heard the story of Radio Normandy which, in the 1930’s, was the first commercial radio station broadcasting to Britain. It delighted its audiences by doing such scandalous things as broadcasting tangos on Sunday! It also broadcasted the first radio advertisements, now the station had been set up by the wonderfully named Captain Plugge, and it was suggested that the idea of ‘plugging’ a product came from the name of the good Captain.

That probably isn’t true, but I love the idea of eponymous objects, things or ideas named after people, even if it isn’t true, they tend to make for a great story.

For example in Winchester cathedral is a magnificent monument to Sir John Clobery, he was a soldier in the civil war and served under General Monck, he gained a reputation for toughness, if you were attacked by Colonel Clobery you were clobbered!

Or perhaps the magnificent Rev Thomas Rackett, a clergyman in Dorset noted for hardly ever visiting his parish, just taking the money. His tombstone says, quite correctly, that his ‘Talents were not confined to the exercise of ordinary parochial duties’. He became notorious when he was named in a parliamentary debate on clergyman who were absent from their parishes. This was a time when Christianity was almost optional amongst clergy of the Church of England. 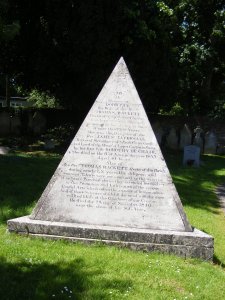 He was buried under a pyramid, and the story in the village is that a racket, in terms of a fraud or con, is named after their infamous rector.

One response to “What’s in a Name?”