Before there were photographs there were cameras, indeed the word camera means a small room, hence evidence heard in camera. However the cameras I am going to discuss are the direct ancestors of the photographic camera, the Camera Obscura and the Camera Lucida. As people who have read my blog will guess, to understand how they worked I decided to build copies. Both cameras were designed as drawing aids, to help a person unskilled in the art of drawing to draw a view or portrait.

I had long known the principle of this device, an image is projected from below onto a piece of thin paper, by means of lenses and mirrors. I began with a lens I happened to have lying around in my desk draw, and a pocket mirror picked up for a few pence in a charity shop. I began by getting the basic dimensions and proportions right by making a model in cardboard.

I then built the wooden version, and when the basic form was right, I varnished it and prepared to experiment. 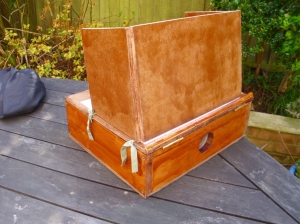 The camera works by projecting an image on a glass screen, a thin sheet of paper was placed over the screen, and the image traced. I found that, although it is not easy to work, I managed to produce a picture, better than one I could have drawn freehand. Adjustment of the lens (I eventually replaced it) and the type of paper used, meant that a clearer image was produced. 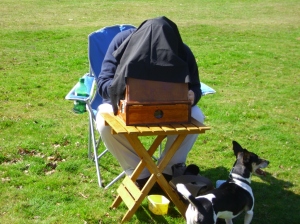 In the past one was used by Canaletto to get the details of the buildings he was using in his buildings.

This is a very different device, a small prism (also found at the back of a desk draw) was mounted in a small wooden box so that I could look down and see what was in front of me. If I looked through the prism with one eye, and kept the other eye open looking down on a piece of paper, I would see the view on the paper as well as my hand and pencil.  It is not as easy to trace this view as it is on the Camera Obscura.

Trying it during a recent visit to 1815, it was suggested that it might be of more use to someone who was already skilled at drawing.  So, as my eldest son – known as the Artist in the blogsphere, was down for the weekend, I decided to ask him to try and use it. 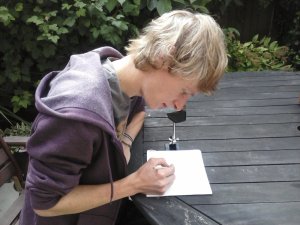 He found it usable, but personally he thought it would be easier to do a simple field sketch. Though he felt that someone who wasn’t that skilled might have learned to use it as a guide for field sketches.

As it is much smaller than a Camera Obscura, it was favoured by early nineteenth century explorers. One is said to have been taken by Lewis and Clark on the second land crossing of North America.

In the 1820’s a Wiltshire Gentleman took examples of both of these cameras on his honeymoon to Italy. He was useless at drawing but he was fascinated by the lovely little image the Camera Obscura produced. Surely, he thought, there could be a way to preserve this image scientifically.