The Danger of Historical Reconstructions – Always read the Small Print

I had just made some Gunpowder Ice Cream, and was wondering if there was some other unusual, historic, dessert I could try. I therefore turned to one of my older cookbooks The Compleat Housewife or Accomplish’d Gentlewoman’s Companion written by Mrs E. Smith in 1753. I was looking through the various whipped creams and syllabubs, most looked rather pleasant, Orange cream, Apricot cream, then I saw this recipe and couldn’t believe it.

In the eighteenth century Ratafias were drinks, and other foodstuffs especially biscuits, flavoured with Almonds. Indeed the preceding recipe is for Almond Cream. I then looked through my other early cookbooks and soon discovered another recipe, this time from The Country Housewife and Lady’s Director by Richard Bradley of 1736. 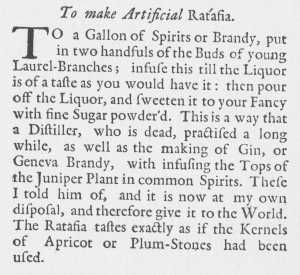 Now there are two plants called Laurel to be found in Britain, they are very common, indeed I have both in my garden. Cherry Laurel (usually just known as Laurel) a decorative shrub with large leaves, crushed its leaves have a distinct scent of Almonds, and Bay Laurel (usually just known as Bay) which has similar shaped leaves with a distinctive scent and is a very valuable herb. Now the reason for my surprise is that I had long known that Cherry Laurel was extremely poisonous, crushed laurel leaves were used by early entomologists to kill insects. The Almond smell, and I presume taste, comes from a range of cyanides produced by the plant.

In the eighteenth century it was known that laurel was poisonous, but it was thought that you had to take a large quantity to kill you though I discovered that one eighteenth century doctor who investigated the poisonous nature of the plant agreed that a small dose might not kill you, but made the sensible suggestion that long term use was ‘unwholesome’.

By the early nineteenth century, Ratafias were still popular, but made more sensibly out of Almonds. An extract of Laurel, Laurel Water was still made and used as a cleaner, insect killer and occasional husband remover. Bay was used, as it still is, as a herb, often with meat dishes. Which brings me to my final recipe, this is from Menus & Recipes of the Baron Brisse translated by Mrs Matthew Clark in 1890.

Unfortunately this, potentially poisonous recipe, was the result of a problem in translation, the French word Laurier can be translated as both Laurel and Bay, perhaps Mrs Clark had never learnt that the shrub generally known as Laurel is poisonous. Replacing the Laurel Leaves with Bay Leaves would produce a rather rich stew.

So when you are trying out old recipes, always read the list of ingredients and, if you cannot find them in a supermarket or specialist food shop then forget about it, and go onto something else.

The Gunpowder Ice Cream was, of course, made using Gunpowder Tea. This is a very old blend of green tea which makes, as I have just discovered, a very refreshing ice cream.