Of course, the one thing that a pickpocket wanted to get every time was money. You could spend it straight away, it didn’t need to be sold to a fence – though in the early nineteenth century that wasn’t always true.

Though before I talk about the actual money that might have been in the pocket of a Regency gentleman, I want to consider how it might have been carried. Very low denomination coins, pennies, half pennies and farthings might have been carried loose, as they were relatively large (as I will discuss later some were very large), but as there were a number of high value, small size coins, purses were common. Banknotes were carried in pocket books, these looked exactly like modern wallets. Indeed some even have spaces that look as if they could take credit cards! – thought these were for visiting cards.

Purses were another matter, they were very varied and gentlemen, as well as women, might carry brightly coloured ones. 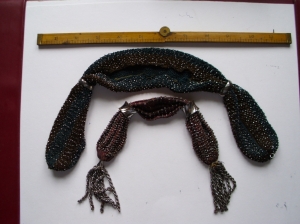 Miser’s or ring purses are long, sausage shaped, purses with a slit in the middle where the coins could be inserted, then slid to one end and held in place with a moveable ring. The practice seems to have been for one end to hold lower value coins, and the other higher value. They were common from the late eighteenth to late nineteenth centuries. They were called miser’s purses because of the difficulty removing money, it takes time to get the coins out so the user seems to be reluctant to hand over their coins.

Netted purses, this type of purse is just the sort of thing that might have been made by a lady and given to friend or relation (I can imagine Georgiana Darcy making one of these under the tutelage of her governess, the replacement for the disreputable Mrs Younge, and giving it to her brother). Netting was a very popular handicraft at that period, so much so that it led to a revolution in fashion that reverberates today. Up until the late eighteenth century women had pockets under their skirts, which were tied to a band round their waist and accessed through a slit in the skirt or petticoat. Then fashion changed, the Empire Line came in with a straight, close fitting, dresses with nowhere to hang a pocket without spoiling the line of the garment.

However ladies no took to carrying their netting equipment in small bags, which the French thought silly and called them Ridicules, in England they were welcomed and as they carried netting tools were named for the craft Reticules – from the Latin Reticulum, netting. These bags have been carried by women ever since, as the craft disappeared they were renames simply hand bags, though in America for some reason they were thought to look like purses, and that name had stuck to them.

The clasp, of gilded brass, would have been bought from a haberdasher. It was almost certainly made in Birmingham – where absolutely everything was made at this time.

This simple leather purse is very small and plain, it has two compartments and will only hold a few coins. However in the past century it has had another, much more unusual and romantic role, holding wedding rings. At my parents wedding, at my and my brothers weddings and at my son’s wedding, the best man kept the wedding rings safe in this purse. I hope to keep up this tradition if and when my other son and nephew and nieces get married.