Now you have written your letter, and dried the ink with ‘pounce’ powdered chalk, crushed cuttlefish bone or something similar. Blotting paper did exist but was expensive and little used until late in the nineteenth century. Rather powder was shaken over the writing with a ‘pounce pot’, a little container that looked like a pepper pot. The excess was then shaken off, creating work for the housemaid who had to dust and sweep the room.
The letter was then folded before being addressed. Envelopes as we know them didn’t exist, references to envelopes in contemporary writing refer to a second sheet of paper wrapping round (enveloping – hence the word envelope) the first. However unless your letter ran to two pages you didn’t use a second sheet as letters were charged by the page. 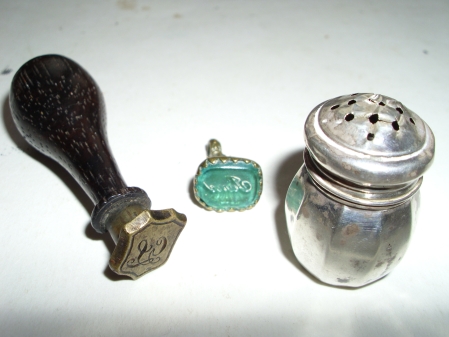 The folded letter was then sealed to keep the contents secure. There were two ways of doing this, first using wax. A hard material, known as sealing wax, was melted, often in a little ladle, and a small amount poured onto the letter. Left to cool for a few moments the seal was then pressed into the wax to make the seal secure. Seals would be engraved with initials, coats of arms or other devices. In the nineteenth century there was a fashion for ‘motto seals’. It was considered impolite to use a motto seal on letters to anybody other than very close friends, a very wise restriction considering the trouble that Bathsheba Everdene caused in sending a valentine card to Farmer Boldwood, using a motto seal.

Wafer Seal, Wafers and Letter sealed with a wafer

The other way of sealing a letter was with a ‘wafer’. There were two types of adhesive wafers, the simplest and earliest were usually made at home. A sheet of very thin paper was coated with paste (the old fashioned flour & water paste works very well) and left to dry hard. The paper is turned over and pasted on the other side. When hard and stiff the paper is cut into half inch squares. To seal a letter the wafer is moistened with the tongue on either side and placed between the two papers to be sealed. A ‘wafer seal’, a seal with a cross hatched end, was pressed down and so sealed the letter. The second sort of wafer was only glued on one side and was placed over the two sheets and pressed down with a flat seal. This type of wafer continued in use to close envelopes as they developed, sometimes with mottos. They were collected in the nineteenth century.

Wafer Seal and album of Wafers

Now your letter could be posted. It was taken to a local post office and left there. It would then be dispatched to the recipient who had to pay for the letter. This was one of the issues that would be addressed through the genius of Rowland Hill a few years after our period.