Christmas Musings – What Shall we have for Christmas

In just about every media outlet at the moment you will come across adverts or advice on Christmas food. Alternatives for Christmas dinner, or advertisements for what are considered traditional foods, for example one cut-price supermarket was listing offers on Beef, Goose and Turkey. But, as an historian, I was naturally curious to see if I could discover how long such foods have been associated with the season.

To the Victorians, the ancient Christmas dish was wild boar. This was mostly due to the Boar’s Head Carol, the best known version of this was printed in 1521 by the magnificently named Wynken de Worde (possibly the earliest case of nominative determinism).

The boar’s head in hand bring I,

Bedeck’d with bays and rosemary.

I pray you, my masters, be merry

The boar’s head, as I understand,

Is the rarest dish in all this land,

Which thus bedeck’d with a gay garland

Wild Boar rapidly disappeared from Medieval England, careful woodland management removed their habitat, whilst their appearance on the royal Christmas dinner table didn’t do them much good either, in 1251 Henry III had 300 for Christmas Dinner, whilst two years later his wife had seventy at her own private celebrations. In reality whatever meat was most expensive or luxurious was chosen. 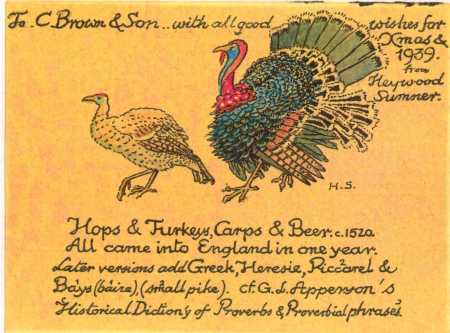 A hand drawn Christmas card by the Arts & Crafts artist and Archaeologist Heywood Sumner. It takes a wonderful mind to put references on your Christmas cards!

Good bread and good drinke, a good fier in the hall,

Beefe, mutton, and porke, shred pies of the best,

as then in the countrie is counted good cheare.

Essentially all the food now considered traditional for Christmas is listed here, cold meat, roast meat, pies nuts and fruit. Vegetables were rarely mentioned and only ever considered as adjuncts to meat.

As well as these dishes, there were widespread local dishes, associated with Christmas. Perhaps the oddest was found on the New Forest.

Ingredients for a Christmas Pie, by Thomas Bewick

There is a sport in which many Forest youths used to indulge; they still do, but nothing like to the same extent as they used; it is Squirrel-hunting, the hunters employing one of two weapons, the “squail” and the “snogg”, both of which lethal implements are Forest productions, as are their names.

The “squail” is a stick, twelve to fifteen inches in length, slightly bendable, with a head of hard wood. The “snogg” is thicker, and wears a cap consisting of a lump of lead.

Foresters wield these home-made weapons in an extraordinarily deadly manner; they will fetch down a squirrel from the top branches of a tree nine times out of ten.

Not so very long ago there was a custom for the squirrel hunters of each village to, meet at Christmas eve at the local inn and regale themselves with squirrel-pie, the products of their squails and snoggs, but, like many an old-time fashion, this has now fallen into desuetude, and the sport of squirrel-hunting, though it still exists, has ceased to be an organised concomitant to Christmas celebrations in the Forest.

Sport and Sportsmen of the New Forest, C R Acton 1936

Having grown up on the New Forest I can say that squirrel pie is no longer a local Christmas dish, we had to make do with turkey like everybody else.

4 responses to “Christmas Musings – What Shall we have for Christmas”