Chris Eastaugh, an old school friend, recently posted a picture of cake he had made on Facebook and posed the question, ‘An article about Victorian sweetmeats, Gordon Le Pard?’ I may well look at other historic cakes in the future but now I would like to bring my Christmas Musings to an end at Twelfth Night, considering Twelfth cake.

Today we regard Twelfth Night as the occasion for putting the Christmas decorations away, however at the beginning of the nineteenth century, this was when the main Christmas celebrations took place. At the centre of the celebrations was Twelfth Cake. This was an impressively decorated cake, usually supplied by a professional pastry cook, their windows were one of the sights of the period.

In London, with every pastrycook in the city, and at the west end of the town, it is “high change” on Twelfth-day. From the taking down of the shutters in the morning, he, and his men, with additional assistants, male and female, are fully occupied by attending to the dressing out of the window, executing orders of the day before, receiving fresh ones, or supplying the wants of chance customers. Before dusk the important arrangement of the window is completed. Then the gas is turned on, with supernumerary argand-lamps and manifold wax-lights, to illuminate countless cakes of all prices and dimensions, that stand in rows and piles on the counters and sideboards, and in the windows. The richest in flavour and heaviest in weight and price are placed on large and massy salvers; one, enormously superior to the rest in size, is the chief object of curiosity; and all are decorated with all imaginable images of things animate and inanimate. Stars, castles, kings, cottages, dragons, trees, fish, palaces, cats, dogs, churches, lions, milkmaids, knights, serpents, and innumerable other forms in snow-white confectionary, painted with variegated colours, glitter by” excess of light” from mirrors against the walls festooned with artificial “wonders of Flora.” Horne Table Book 1841 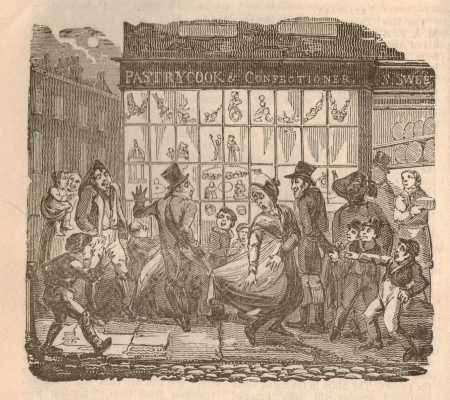 These crowds attracted naughty children, who delighted in a particular form of disobedience.

On Twelfth night in London, boys assemble round the inviting shops of the pastrycooks, and dexterously nail the coat-tails of spectators, who venture near enough, to the bottoms of the window frames; or pin them together strongly by their clothes. Sometimes eight or ten persons find themselves thus connected. The dexterity and force of the nail driving is so quick and sure, that a single blow seldom fails of doing the business effectually. Withdrawal of the nail without a proper instrument is out of the question; and, consequently, the person nailed must either leave part of his coat, as a cognizance of his attachment, or quit the spot with a hole in it. At every nailing and pinning shouts of laughter arise from the perpetrators and the spectators. Yet it often happens to one who turns and smiles at the duress of another, that he also finds himself nailed. Efforts at extrication increase mirth, nor is the presence of a constable, who is usually employed to attend and preserve free “ingress, egress, and regress,” sufficiently awful to deter the offenders.

However the more acceptable entertainment took place at home.

First, buy your cake. Then, before your visitors arrive, buy your characters, each of which should have a pleasant verse beneath. Next look at your invitation list, and count the number of ladies you expect; and afterwards the number of gentlemen. Then, take as many female characters as you have invited ladies; fold them up, exactly of the same size, and number each on the back; taking care to make the king No.1, and the queen No.2. Then prepare and number the gentlemen’s characters. Cause tea and coffee to be handed to your visitors as they drop in. When all are assembled and tea over, put as many ladies characters in a reticule as there are ladies present; next put the gentlemen’s characters in a hat. Then call on a gentleman to carry the reticule to the ladies as they sit, from which each lady is to draw one ticket, ,and to preserve it unopened. Select a lady to bear the hat to the gentlemen for the same purpose. There will be one ticket left in the reticule, and another in the hat, which the lady and gentleman who carried each is to interchange, as having fallen to each. Next, arrange your visitors according to their numbers; the king No.1, the queen No.2, and so on. The king is then to recite the verse on his ticket; then the queen the verse on hers; and so the characters are to proceed in numerical order. This done, let the cake and refreshments go round, and hey! for merriment!

Then a very strange thing happened, as Christmas celebrations developed into the modern form, Twelfth cake and the parties associated with them vanished, and vanished very quickly. Only twenty years after the above accounts were written, the Twelfth Cake was simply a memory. 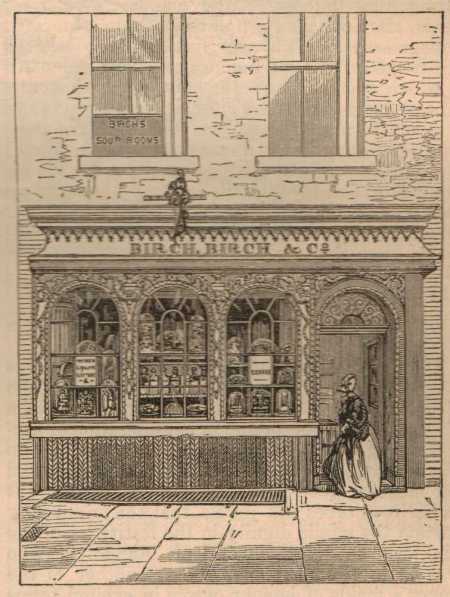 The celebration of Twelfth-Day with the costly and elegant Twelfth-cake has much declined. Formerly, in London, the confectioners’ shops on this day were entirely filled with Twelfth-cakes, ranging in price from several guineas to a few shillings; the shops were tastefully illuminated, and decorated with artistic models, transparencies, &c. We remember to have seen a huge Twelfth-cake in the form of a fortress, with sentinels and flags; the cake being so large as to fill two ovens in baking.

One of the most celebrated and attractive displays was that of Birch, the confectioner. Mr Samuel Birch, born in 1757; he was many years a member of the Common Council, and was elected alderman of the ward of Candlewick, and served as Lord Mayor in 1815, the year of the battle of Waterloo. The alderman used annually to send, as a present, a Twelfth-cake to the Mansion House.

The upper portion of the house in Cornhill has been rebuilt, but the ground-floor remains intact, a curious specimen of the decorated shop-front of the last century. Chambers Book of Days 1864

So tonight, eat a little bit of remaining Christmas Cake (if you have some), and think of one of our lost Christmas traditions.