Historical Reconstructions – The Table is Laid

In my previous blog I looked at changes that had happened to the simple dining fork during the eighteenth century. I roughly laid out a place for dinner, using contemporary artefacts, so now to consider the other changes that have taken place in the way we ate.

First the spoon, spoons have been around almost as long as there have been people. But during the eighteenth century something rather strange happened. Originally spoons were placed on the table in the fashion shown, with the open side of the bowl downwards. Then, for some unknown reason, the fashion changed and the spoon was laid with the open side of the bowl uppermost. The little spoon I used shows this change perfectly. It is silver, hallmarked for London in 1807. The first owner was rather old fashioned and had his or her initials engraved on the back of the bowl, in typical early nineteenth century lettering. Another owner, in the later nineteenth century, who placed the spoon on the table in the way we do also wanted to have their initials on the spoon and had them cut on the handle. 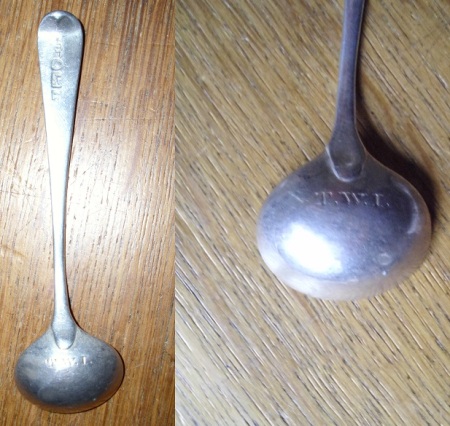 The Regency initials on the bowl of the spoon

The Victorian initials on the handle of the spoon

My brother, in a comment on my previous blog, had another query about spoons;

“Now what about soup spoon being pushed away from you?”

This practice, of dipping the spoon in the soup by moving it away from you, and then bringing it to the mouth where you would drink the soup from the spoon, never putting the spoon in the mouth, seems to have developed in the late eighteenth century. It appears in at least one book of etiquette from the early nineteenth century and seems to be associated with the rule of sitting straight upright at dinner. Eating soup in this fashion also makes it less likely to spill the soup.

The Georgian initials on the Pewter plate

Second, the Plate. Here it is a plain pewter plate of eighteenth century date, this one doesn’t have a makers mark, but bears the initials of the owner in typical eighteenth century characters. Pewter was the most widespread material for plates, bowls and drinking vessels until well into the eighteenth century. It can be polished until it looks like silver and makes a splendid show, unfortunately pewter of this date is rich in lead which just adds to the healthiness of the meal (see my earlier blogs). At the beginning of the eighteenth century pottery plates were less commonly used as they broke easily, were heavier and the soft glaze chipped readily. It wasn’t until the development of high quality earthenware, and later bone china, by inventors like Wedgewood and Spode that pewter fell out of fashion and ceramic plates became the norm. 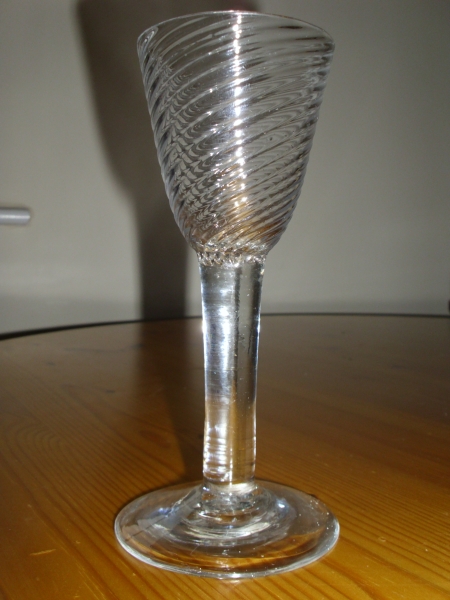 And finally the glass, drinking glasses had been common in England since the seventeenth century when improvements in glass making made glass cheaper and stronger. Incidentally this led to the development of first bottled beer (in London in the early seventeenth century) and sparkling wine (in Herefordshire in the mid seventeenth century) the making of which eventually spread to France! This is an eighteenth century wine glass of a type not often seen, because it was so common. It was the sort you might have found in an Inn or Assembly Rooms, it is made of thick glass with a heavily ribbed bowl. These ribs were so that it was easier to hold when the drinker was Foxed or Full as a Goat, or any of the other terms for slightly inebriated. This was needed as hard drinking was very common, in a diary I own from1800, a series of wagers are listed, made by the young gentleman who owned it, most of the time the stakes were bottles of wine!

So sit down, eat your dinner and wonder how we got the place (setting) today.

3 responses to “Historical Reconstructions – The Table is Laid”