Part 3 Treasure from the Deep

As she was having breakfast Susan brought a letter to her.

“It has just been delivered, there is a boy waiting for a reply.”

The letter was brief, it began with condolences on the death of her husband then continued. ‘I can call on you at the hotel any time after six, but if you would like to see what has been raised from the shipwreck, I will be at the Abergavenny Store all day.

“Susan, tell the boy to let Captain Braithwaite know that we will be at the Store later this morning.” When Susan returned, she continued;

“I would like to see what he has brought up from the deep, have you heard anything about it.”

“Mostly cloth and clothes that were being taken out to India, there has also been some fine china that has been sold in one of the sales here. But one man told me that lately there have been some small, heavy boxes. He thinks treasure! But no one is ever allowed into the Store except on sales days, and even then the rooms at the back are always locked.”

Charlotte rose from the table, “Then let us see what he has got in this Store of his”

As they approached the building she realised that something was happening, yesterday there had just been a sleepy man by the door who took her note for Captain Braithwaite. Today several burley sailors stood guard and a heavy waggon waited outside. One fashionably dressed man was trying to persuade the men to let him in, but they refused despite all his threats. The sailors smiled when they saw Mrs Bennet, they recognised the ‘Gallant Captain’s Lady’, and pushed the man to one side to let her and Susan walk in.

At first glance it was an anti-climax. The building was like a large barn, lengths of cloth were hung from the rafters and various coats over lines along one wall.

“Greatcoats for use in hot countries.” Said a young man walking up to them with a smile. “They sell well here, I think we have started a fashion amongst the men of Dorset.”

He held out a hand, “Allow me to introduce myself, I am John Braithwaite, though as my father is also John I am usually just called the Young Captain. You are Mrs Bennet?” he posed it as a question. She nodded, he continued rapidly.

“I will take you to my father, he is with Mr Knight of the company at the moment.”

“The company?” Charlotte was catching his rapid way of talking.

“John Company, or the Honourable East India Company if you prefer. He is usually a miserable soul, convinced that we are trying to rob him, but whenever we offer to let him come down in the Bell to prove that we are not, he gets even crosser. But today he is in a very good mood, because of what we lifted.”

He opened the door at the back, this led into a smaller room, with a central table surrounded by shelves filled with various objects. By the table stood a tall man, an older version of the young man who had let them in, clearly Captain Braithwaite. At the table was a thin faced man who looked up crossly. Captain Braithwaite said something to him and he returned to his work, weighing a number of small cloth bags, then putting them back into a wooden chest.

“Mrs Bennet, I must apologise, I have to finish here. I trust you won’t mind waiting.”

The young captain helped her to a chair, he then walked over to the table and picked up one of the bags, this one had been opened. Mr Knight scowled at him as he tipped a handful of large silver coins into his hand.

“Silver dollars for trade with China. There was a fortune on board and yesterday we raised the last of the boxes of silver.”

“How many were there?” She asked, “And how much is it worth?”

“Sixty boxes, and all like this one.” He paused, “And worth just over thirty thousand pounds.”

Susan looked on in wide eyed amazement, there really was a fortune in sunken treasure there.

He handed the bag back to Mr Knight, who quickly counted the coins, then placed the bag with the others in the box, shut the lid and watched as it was nailed down. Then cord was tied tight round the box and he sealed the knot. He rose and turned to Captain Braithwaite.

“Thank you Captain, all is correct, we will remit your balance to your account here as requested.”

He left followed by two men carrying the box.

“Thank goodness that’s over.” The Captain smiled and turned to Charlotte.

“My apologies for that, but I am glad to be rid of that silver, it is safe in a bank and no longer my responsibility.”

“That is perfectly all right, I quite understand, indeed I now realise how you can easily repay the debt owed to my late husband.”

“Charles Bennet was a brave man, and I am very grateful to him. He believed in my machine and I am only sorry that I was never able to show it to him and what it could do.”

“Thank you sir, I am glad he was a good friend to you. I know I am a poor substitute, but would be very grateful, and very interested, if you could show me what it could do.”

“Of course madam.” He swept a hand round to show here the loaded shelves. “You saw the cloth and other items in the outer store, these are the more valuable objects raised.”

She looked at the mixed collection of china and metal work.

“What will happen to it?”

“It either goes back to the Company or is sold here.” He smiled, “And I get one eighth of everything for my trouble.”

“So for raising that silver?”

She gasped, he rose and went to a shelf, and lifted down a long object wrapped in cloth. As he unwrapped it she saw it was a naval officers sword, no it was more than that, it was a Patriotic Fund sword, given to officers who had distinguished themselves for their bravery. 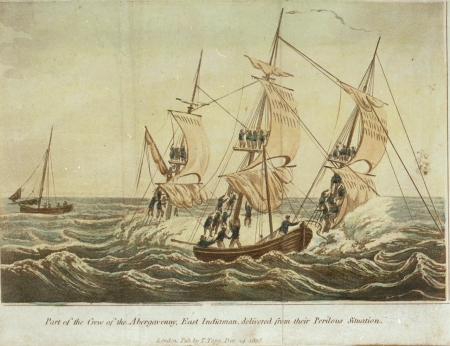 “There are also some items that belong to people who were on board. This belonged to Captain Wordsworth, commander of the Abergavenny. His brother has asked us to look out for it as his family would like it back.”

“Of course, he must have been a very brave man to receive it.”

“I will be sending it north as soon as I can.” For a moment he looked at it in silence, then continued to describe the items he had found. After an hour he had finished. She followed him out of the store.

“Thank you Captain Braithwaite, my husband was clearly right to trust you with the money. And I will be happy for you to repay the loan early, there is just one more thing I would like to do.”

“I would like to go out to the Endeavour to see the Bell.”

He looked at her sceptically, she was fashionably dressed, in clothes that were quite unsuitable for visiting a working vessel. She realised what he was thinking.

“I am a sailor’s daughter and a sailor’s widow, I have sailed on small vessels since I was a baby. I knew exactly what the Endeavour will be like.”

“Very well, I am sure that can be arranged.”

She smiled, then dropped her bombshell.

He looked at her in amazement.

“No, that is impossible, you cannot.”

“Then I will not allow you to repay the debt. Either I descend to the bottom of the sea, or you will pay all the interest owing when the debt is repaid next year.”

She turned her back on him, and the ‘Gallant Captain’s Lady’ left brave Captain Braithwaite standing in shock.