So I have finally started a blog, who am I and why have I done it.

Well first I am an archaeologist, and am curious, in both senses of the word. I am fascinated by an awful lot of things, and believe that the motto of the Royal Society ‘take nobody’s word for it’ is the best one for any archaeologist, historian or scientist to follow. And I am curious in the sense that I am prepared to do things that would be considered somewhat eccentric, if it would prove a point. 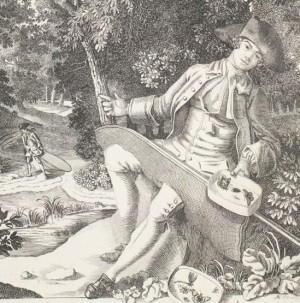 For example this is an eighteenth century butterfly net. How did it work? Some writers considered it clumsy and impractical, I didn’t think so, so I made one to find out. Perhaps one day I will tell the story. You may wonder if I wore knee breeches and a tricorn hat to try out the net, I did not, but would have done if I thought it would have had any effect on the result (do I possess knee breeches and a tricorn hat? – of course I do).

As for why, well people have been asking me to do so for some time, my brother who has been blogging for some time as TanGental, once described me in this fashion.

“I have referred to the Archaeologist on several occasions in this blog. One of his many notable characteristics is his extraordinarily wide range of interests and the depth of his knowledge in those areas.  A conversation with him may start with the foot diseases suffered by Horatio Nelson, continue with a description of the accommodation offered to Charles Darwin when the Beagle stopped in some obscure South American port, divert to the seventeen culinary uses of the petunia during the War of Jenkin’s Ear, segue to the reasons why Archbishops of York always wear flax gloves during the second week after Passover and end with ice cream. Or rather who invented it. You get the idea.”

Well, I don’t know if I will refer to any of the above in the future, but I hope anybody who comes across my blog enjoys it. Read on…..

14 responses to “Let’s get started”