Letter writing was commonplace in the Regency, whole novels were written in the form of letters, like Lady Susan. To write a letter you need paper, pen and ink.

Paper has always been made by professionals, but both pens and ink were made in the Regency household. A pen was made from a quill, a birds feather, most frequently a goose, but any feather could be used. I have seen examples made from the tiny feathers of a woodcock. First the feather would have been trimmed away, leaving a little ‘flag’, then the tip softened in boiling water and finally trimmed with a pen-knife. 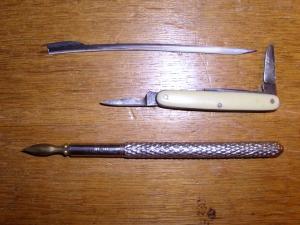 Ready-made pens could be bought cheaply from a stationer, but everybody would have known how to make a pen, as you would have needed to constantly trim your pen whilst writing. Miss Bingley, trying to get Mr Darcy’s attention, interrupts him writing a letter to say;

“I am afraid you do not like your pen. Let me mend it for you. I mend pens remarkably well.”

Penknives were often given as wedding presents to brides, on marriage the lady of the house would be expected to handle the household accounts, and the knife was symbolic of that. For this reason large numbers of decorative penknives survive in perfect condition, never having been used! A wedding present pen knife is the subject of the sinister exchange in Little Dorrit, between the unscrupulous financier Mr Merdle and his step-daughter-in-law.

‘So I am off,’ added Mr Merdle, getting up. ‘Could you lend me a penknife?’

It was an odd thing, Fanny smilingly observed, for her who could seldom prevail upon herself even to write a letter, to lend to a man of such vast business as Mr Merdle. ‘Isn’t it?’ Mr Merdle acquiesced; ‘but I want one; and I know you have got several little wedding keepsakes about, with scissors and tweezers and such things in them. You shall have it back to-morrow.’

‘Thank you,’ said Mr Merdle; ‘yes. I think I should prefer tortoise-shell.’

‘I’ll undertake not to ink it,’ said Mr Merdle.

The exchange is sinister in that Mr Merdle, his frauds about to be discovered, is about to commit suicide and wants the knife to cut his throat!

Pens would be made and carried, either in a little box, or simply wrapped in a scrap of paper. In the early nineteenth century metal nibs were invented, probably in Sheffield, and soon became popular in business as they didn’t need trimming. Quills, however, remained in use throughout the nineteenth century, many people preferring them – Tennyson, for example, used quill pens throughout his long life. His old ones were kept as souvenirs by his numerous fans, indeed fake ‘pens used by Tennyson’ were sold by unscrupulous dealers. 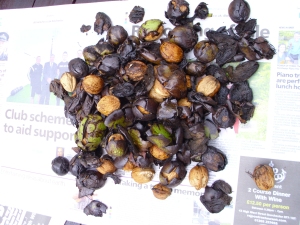 The vital ingredient of Ink

Ink could be bought ready-made, but household books contained many recipes for making it. The one I used involved walnuts. This year has been very good for walnuts, and the trees in our village have born a heavy crop, scattering their black fruit on the ground. I collected a quantity of the black outer fruit, and put the nuts to one side to eat later. The soft outer layers were soaked in water for a couple of weeks, then put on to boil. Every so often I tested the ink and, after three hours, I was satisfied with the colour. I filtered the liquid, added alcohol to preserve it, and bottled it. 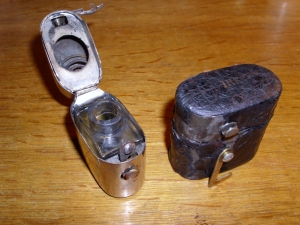 Ink would have been carried in travelling ink wells, these were expensive items and were often stolen by pickpockets, and hence listed in the court records.

Now you have written your letter, it needs to be posted – but that is another story.